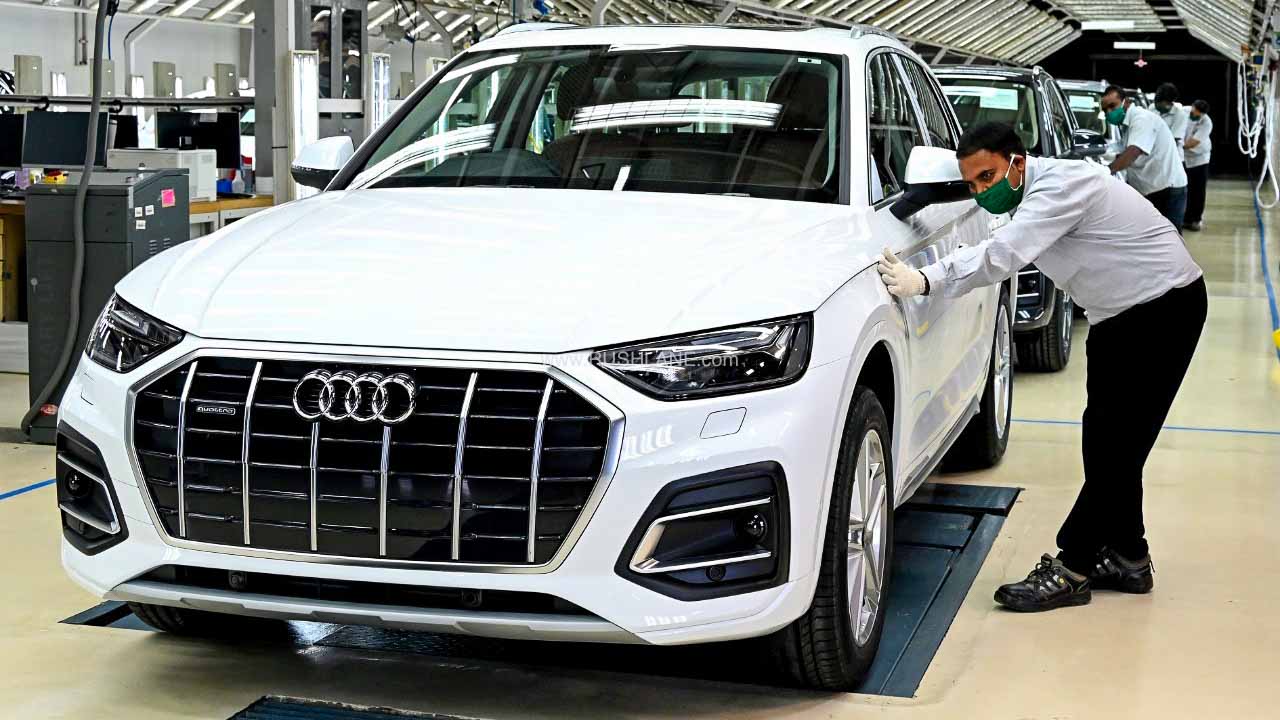 One of the best-selling Audi SUVs in India was discontinued after the implementation of BS6 norms. Finally, the Q5 is returning to India in its latest avatar. Today, Audi India launched the first unit of the facelifted Q5 from its plant in Aurangabad. It will be launched as CKD.

The 2021 Q5 facelift made its international debut last year, but its launch in India was postponed due to the ongoing COVID-19 pandemic. The updated SUV gets revised exterior styling, refreshed interiors and a BS6 emission engine.

Audi suspended sales of several of its SUVs such as the Q3, Q5 and Q7 when the updated emission norms came into force and the company decided to phase out all diesel-powered vehicles from the market. This resulted in a sharp drop in Audi India sales.

The updated Q5 gets subtle changes to the exterior styling such as a more prominent front grille, new LED headlamps and taillamps, and reprofiled front and rear bumpers. The international-spec model unveiled last year comes with Matrix LED technology, though it is not confirmed whether this feature will be offered in the India-spec model.

Inside the cabin of the new Q5, there could be minor changes in the layout along with more features. One of the notable features included in the device is a large 10.1-inch touchscreen infotainment display with the new MIB3 platform. The infotainment unit is also compatible with all standard connectivity features like Android Auto and Apple CarPlay in addition to connected car tech with Amazon Alexa integration.

Audi is finally launching the SUV with a mid-life facelift by the end of November this year after a gap of one and a half year. Local production of the updated SUV has begun at Audi’s facility in Aurangabad, Maharashtra.

As for powertrain specs, as mentioned earlier, Audi has ditched all oil burners from its lineup and gone all-petrol. Hence, the updated Q5 will only be offered with a 2.0-litre turbocharged petrol engine that produces 242 Bhp. This motor is exclusively paired with a 7-speed DSG automatic gearbox. Power is sent to all four wheels via a Quattro all-wheel-drive system.

The facelifted Q5 is also expected to come packed with a lot of driver-aided electronics like the international-spec model. When launched, the Q5 will compete with the Land Rover Discovery Sport, BMW X3 and Mercedes-Benz GLC.

Share
Facebook
Twitter
WhatsApp
Previous articleAnupama: Anupama will leave Anuj Kapadia’s side for the sake of family and Nandini will return to US for summer
Next articleSalman Khan announces the release date of Antim, Aayush’s tears flow in the teaser
RELATED ARTICLES
Automobile