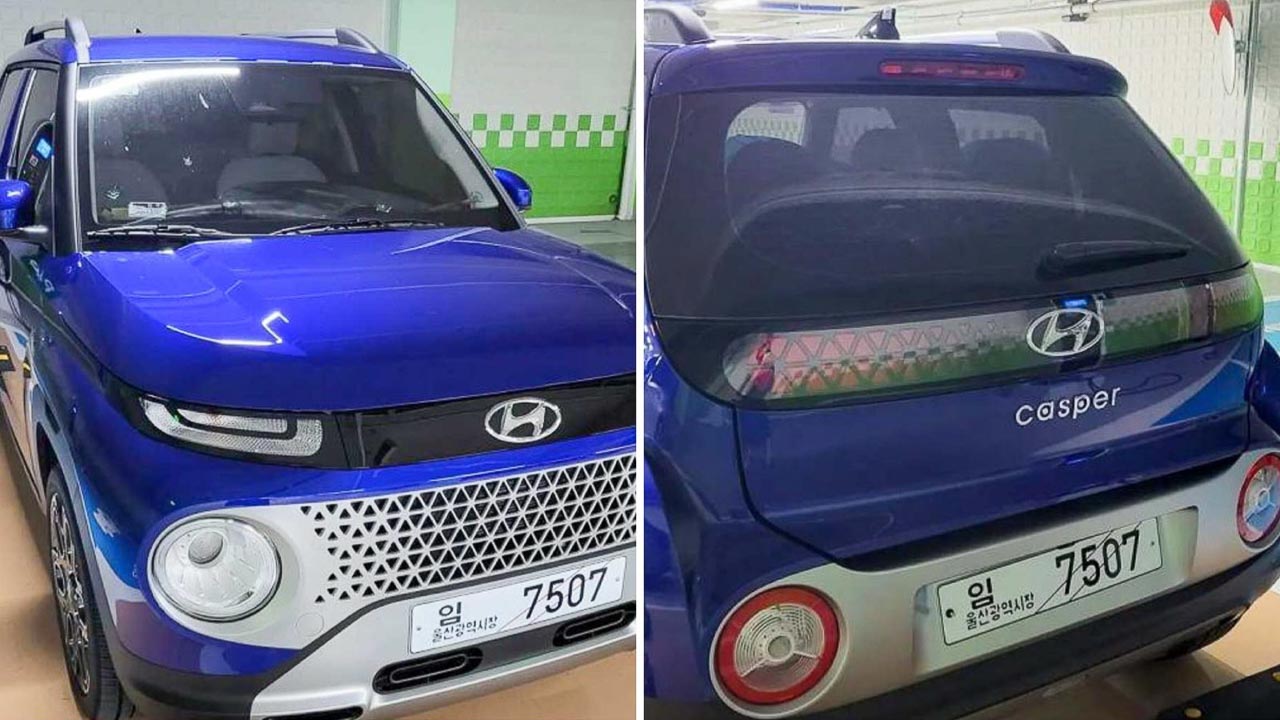 When launched in India, Hyundai Casper will take on the likes of Tata Punch, Mahindra KUV100 and Maruti Ignis

Hyundai recently unveiled the upcoming Micro UV Casper which is all set to go on sale in its home market in a matter of days. Codenamed AX1 internally, this crossover is expected to go through series production this month in South Korea, followed by its official launch. It is expected to be launched in India early next year.

Meanwhile, the first set of real-world photos of the subcompact UV have gone viral on the internet. These reveal Casper’s completely unassuming production-spec model. The real-life pictures of the crossover hatch are just as bizarre as the media images shared by the company.

Coming to its design, like most of its contemporaries, the Casper gets a split lighting setup that includes LED DRLs and turn indicators at the top and a unique pair of round headlamps in the bumper. The projector headlamps are also surrounded by integrated LED DRL rings. A thick shiny black stripe runs from one end of the bonnet to the other.

The front bumper also gets an oddly shaped front grille which is available in two variants. One gets triangular patterned vents and is covered in silver trim, while the other option gets a blacked-out grille with gloss black stripe and checkered pattern vents. The latter unit also gets an additional pair of circular vents on the grille. The dual-tone theme of the grille gives the Caper an SUV look.

Along with the side profile, the car has flared fenders which give it a lot of muscular appeal. Apart from this, the roof rails and black cladding around the wheel arches and door sill give a rough look to the car. Also, its silhouette bears a lot of resemblance to one of its prime rivals- the Maruti Suzuki Ignis. Blacked-out alloy wheels are another highlight that give the Casper a premium appeal.

The door handles for the rear doors are mounted on the C-pillar, just like the Maruti Swift. The quirky theme at the front has also been carried over to the rear end of the hatch.

The unique looking taillights run across the width of the tailgate and have a triangular pattern. Casper badging occupies center stage below the Hyundai logo on the tailgate. Turn indicators, reflectors have been installed on the bumper and reverse light has been installed at the bottom of the bumper.

Other styling highlights include faux silver-coloured bash plates at both the ends, blacked-out A-pillars, rear roof-mounted spoiler with brake lights, shark-fin antenna and dual-tone ORVMs. From the looks of it, the Casper’s cabin is not expected to be the most spacious and is strictly a four-seater. Despite being an entry-level car, we expect it to be well prepared as it comes from Hyundai.