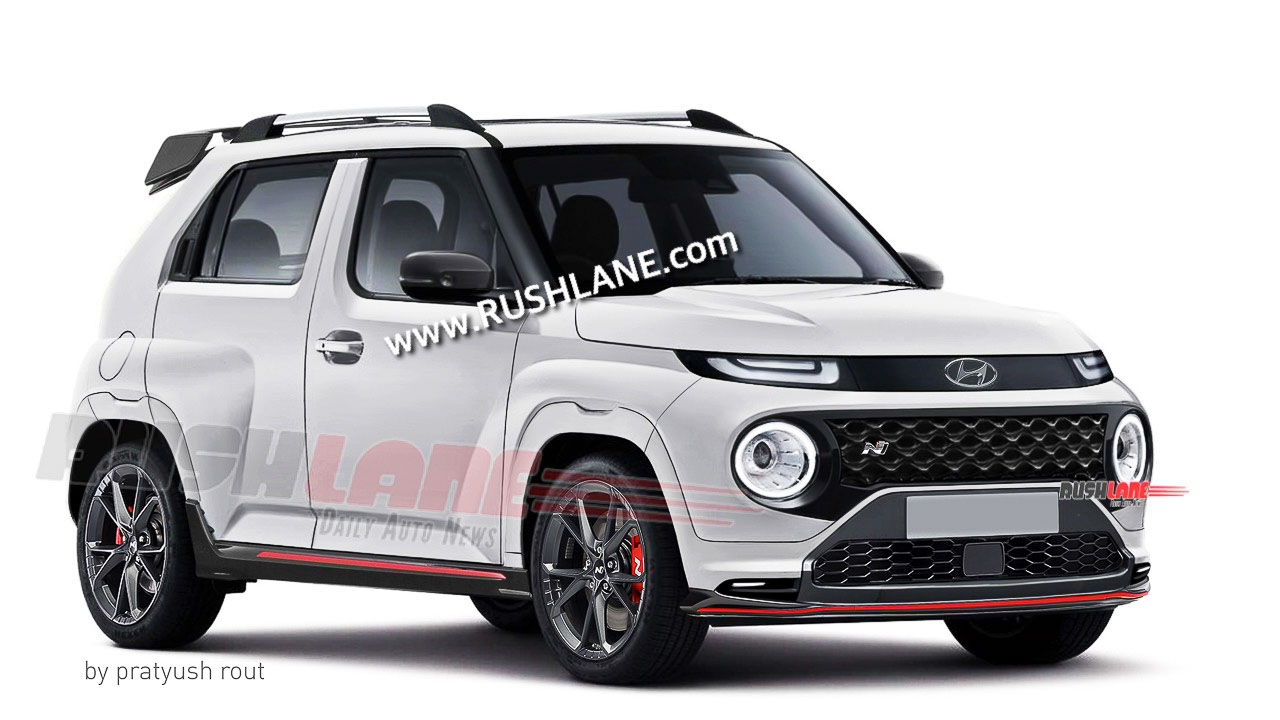 Hyundai recently introduced the N Line variant for the i20 in the Indian market, with prices starting at Rs 9.84 lakh.

In the international markets, the N Line variant is offered alongside several Hyundai cars such as the i10, Tucson, i30, Elantra and Kona. Hyundai recently launched the Casper in its home country, which presents a possibility if it too may get the N-line treatment. While we wait for things to move in that direction, automotive artist Pratyush Raut has come up with an interesting render of the Casper N line.

Like other N Line variants, the Casper N Line gets a checkered flag inspired front grille. It has ‘N’ logo in chrome finish. Part of the skid plate has been removed to accommodate the mesh-grill design air dam. Red accents can be seen on the front bumper and side sills. The brake calipers have also been done in red.

Red accents are more apparent, as the cover is wrapped in body-coloured white. In the stock version, the cladding has been blacked-out. The stock alloy wheels have been replaced with dual-tone sharp looking units. Another significant change is the bigger spoiler mounted on the rear roof.

While Casper is the epitome of cuteness in its original form, this N Line treatment served as an added dose of sportiness. The N Line treatment is based on the philosophy of introducing a limited set of visual enhancements. This ensures that it can be applied to a wide range of cars without interfering with their unique identity.

Other features of Casper are left untouched. These include the split-LED headlamp setup, where the LED DRLs are placed at the top and the headlamps sit below it. The Casper gets circular headlamps, which give the car a retro flavor. The trendy looking DRLs stand out against the shiny black stripe. The entire car has a sculpted profile with muscular cuts and grooves on the fenders and door panels.

Another distinguishing feature is the blacked-out a pillar. The B and C pillars and ORVMs get body colored paint. The ORVMs on the Casper N line have been blacked out. The Casper comes equipped with functional roof rails, which have been kept as in the render.

While the Casper is a good looking car and is expected to get a wide range of features, it is unlikely to be launched in India. One of the major reasons is its small size, less than 3600 mm. This may work in South Korea, as such cars are eligible for special tax benefits.

In the Indian market, most users expect a small car to provide seating for at least five passengers. The Casper doesn’t meet this criterion, as it only appears to be suitable for four passengers. Reports indicate that Hyundai had offered its Indian subsidiary to add Casper to its portfolio. It was rejected due to the ultra-compact dimensions of the car.

Share
Facebook
Twitter
WhatsApp
Previous articleRiya Chakraborty did a sizzling photoshoot in a bralette, shared the picture and wrote – ‘Woman power’
Next articleVideos of this ‘Humshakal’ fan of Siddharth Shukla went viral, said – brother, now Sid is seen in you
RELATED ARTICLES
Automobile