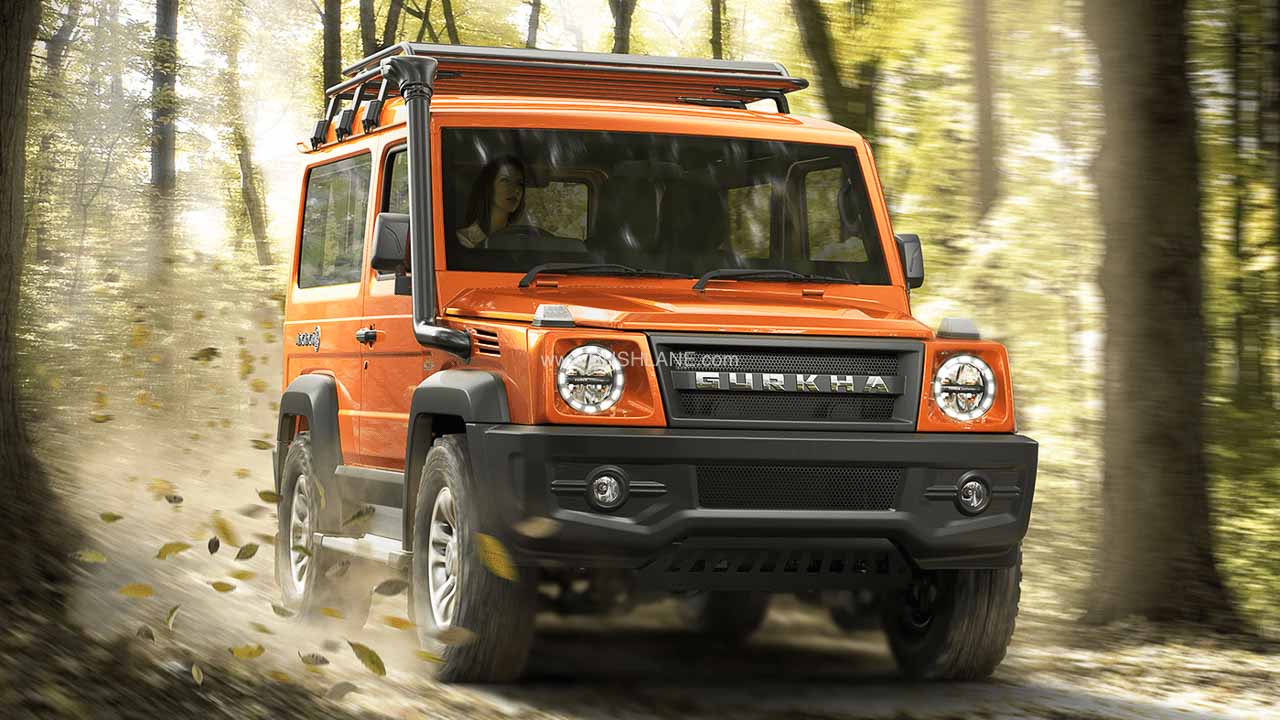 A 5-door version of the new-generation Gurkha will be launched at a later stage that will rival the 5-door iterations of Mahindra Thar and Maruti Jimny.

After several teasers and spy shots on the internet, Force has officially unveiled the new generation Gurkha in its final production-spec form. The SUV is set to go on sale at the end of next month. Prices will be announced on 27 September 2021, while deliveries will start from Dussehra Day (15 October 2021).

The SUV made its first appearance as a pre-production concept at the last edition of the Auto Expo in February 2020. Since then, its launch has been continuously delayed mainly due to the outbreak of the COVID-19 pandemic. Meanwhile, the compact off-roader was spotted testing the road. The exterior of the second generation model receives subtle but noticeable updates to the design, while the interior has also undergone significant changes.

For starters, the Force has retained the rugged exterior of the previous generation Gurkha in the latest iteration of the UV. These include chunky front and rear bumpers with flared wheel arches along with thick black cladding, clamshell bonnet and boxy silhouette in profile. The wheel arches are filled with newly designed 16-inch alloy wheels that are covered with thick profile tyres.

Up front, the new Gurkha gets a redesigned shark grille with the company’s emblem embossed at the centre. The grille is flanked by retro-style headlights that now come with bi-LED lighting and integrated circular LED DRLs.

The reprofiled front bumper gets a pair of new fog lamps and a rectangular air dam in the center with provisions for tow hooks. The side profile also gets a large rear glass panel with snorkel which can be mounted as an accessory.

There is a flat tailgate at the rear of the SUV which is fitted with a spare wheel. The redesigned taillamps are now oriented vertically. Other styling highlights include black ORVMs, roof-mounted luggage carrier and a ladder on the tailgate, with the latter two likely to be offered as accessories.

There have been some significant updates inside the cabin, the most prominent of which is the seating layout which now includes front-facing rear seats. The company has retained the usefulness of the old Gurkha inside the cabin of the new model as well. It offers best in class leg room, head room and elbow room and over 500 liters of boot space.

Gurkha 2021 comes with new Smart Midnight Black interior complete with touch screen infotainment compatible with Android and Apple Play and navigation with True Mirroring via USB. Charging ports have been provided for all the four passengers. It gets many other convenience features like a first on Gurkha like steering column with tilt and telescopic adjustment, power windows, central locking, speed sensing door lock, rear parking sensor, single piece rear door with wiper, variable intermittent speed front wiper , tire pressure monitoring system, cornering lamp, take me home and take me to the Gurkha.

Powering the new Gurkha will be a BS6 updated 2.6-litre diesel engine that will crack 89 bhp and 250 Nm @ 1400 – 2400 rpm. It will be mated to a 5-speed Mercedes G-28 transmission with cable shift and a hydraulically actuated clutch with booster ensures smooth gear changes.

Power will be sent to all four wheels via a low-range transfer case. The new Gurkha will also get front and rear locking differentials. It offers best in class maneuverability with the shortest turning circle radius of just 5.65 metres. The SUV continues to ride with independent double wishbone suspension at the front and a rigid axle at the rear, with coil springs all around. When launched, it will only have a direct rival in the form of Mahindra Thar.

Prasan Firodia, Managing Director, Force Motors, said, “In line with the changing expectations and aspirations of the customers, we have designed and developed the all-new Gurkha on a ground up, modular architecture platform and we are confident that we will now be able to drive the growth and development of the Gurkha. Appeal to a much wider audience who want a vehicle that is suitable for daily commutes as well as adventure trips. “

The all-new Gurkha will be available in five colors – Red, Orange, Green, Gray and White. Prices will be announced in the last week of September, after which dealers will start taking bookings. The vehicles are expected to reach the dealerships in the first week of October and the first deliveries to the customers are planned on the day of Dussehra. Initially, the all-new Gurkha will be available at select locations in key markets. Thereafter, the footprints will be expanded in a phased manner. Gorkha 2021 comes with best in class warranty 1.5 lakh km / 3 years and 4 free services.

Force Motors has also tied up with Auto Europa India, which has over 6,200 touch points for road assistance. Also custom-made accessories and merchandise are offered to make each Gurkha unique.

Share
Facebook
Twitter
WhatsApp
Previous articleAnil Kapoor remembers the days when it was a matter of pride for him to sit in a taxi
Next articleMet Gala: Madonna’s daughter’s bold look goes viral, shaves armpits without raising her hand
RELATED ARTICLES
Automobile