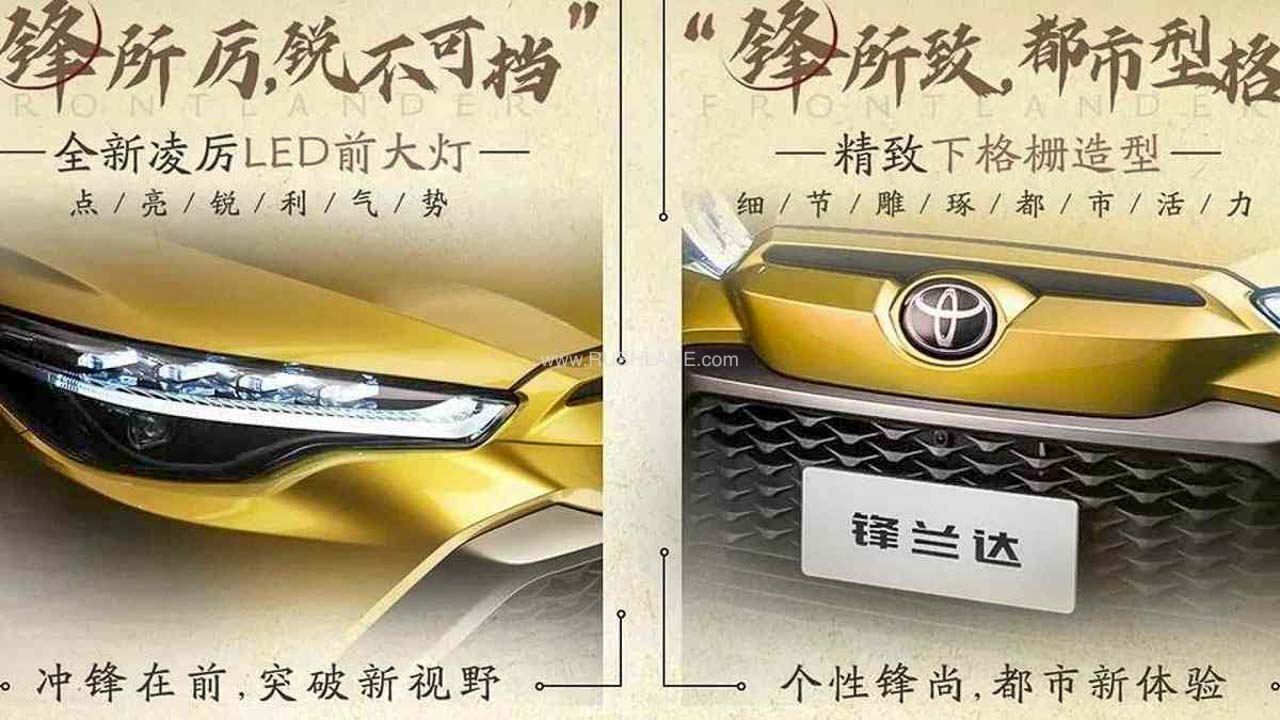 In all likelihood, Toyota will not launch the upcoming Frontlander crossover/SUV in India anytime soon

Ahead of its global debut, Toyota has teased its upcoming SUV named Frontlander on its social media handle. The mid-size SUV is based on the international-spec Corolla Cross which is currently on sale in select markets like Japan, USA, Brazil and Thailand.

The Toyota Frontlander SUV will be positioned below the RAV4 in the Japanese carmaker’s global SUV lineup. The Frontlander will first go on sale in China, followed by other international markets. It’s essentially a rebadged Chinese-spec Corolla cross with subtle cosmetic variations to differentiate itself.

In the Chinese market, the Frontlander will be produced and marketed in collaboration with local automaker GAC. Toyota already sells some SUVs from its international portfolio in China under different brand names. For example, the RAV4 is sold as the Wildlander and the Highlander is sold in the Chinese market as the re-hashed Crown Kluger.

Coming to the Frontlander, it is based on the TNGA (Toyota New Generation Architecture) modular platform that underpins a wide range of sedans and SUVs globally. Under the hood, it has a familiar 1.8-litre naturally aspirated petrol engine that has been paired with hybrid technology. Power will be sent to all four wheels via a standard AWD (all-wheel-drive) system.

The Frontlander is expected to share almost everything with the Japanese Corolla Cross, including its underpinnings. Aesthetic updates on the former as compared to the latter should include a redesigned front grille, a larger air-intake and a reprofiled front bumper with new headlamp cluster. Apart from this, the rear end of the Frontlander will get a revised bumper and new LED taillights. It will also roll on newly designed 18-inch alloy wheels.

The upcoming SUV is set to make its debut in China during the Guangzhou Auto Show in November. The Frontlander will be made as a left-hand drive car for markets like China, while the Corolla Cross is available as a right-hand-drive model in Thailand. There is no confirmation on whether either of the SUVs will reach the Indian shores in the near future.

However, Toyota may bring the RAV4 to India as it has been spotted on several occasions in the past. The Japanese carmaker is also developing a compact mid-size SUV in collaboration with Maruti Suzuki that will take on the Hyundai Creta, Kia Seltos, Skoda Kushak and Volkswagen Taigun.

The SUV will be based on the DNGA (Daihatsu New Global Architecture) platform which is essentially a more affordable version of the TNGA. This platform is currently based on the Toyota Raize compact SUV.

Share
Facebook
Twitter
WhatsApp
Previous articleKBC 13: Savita Bhati left the show on KBC’s question of one crore, could you answer?
Next articleOTT winner Divya Aggarwal was not invited for Bigg Boss 15, said- I don’t know what is happening
RELATED ARTICLES
Automobile