Anil Kapoor’s daughter Riya wanted to run away with boyfriend Karan Boolani and get married in the living room! 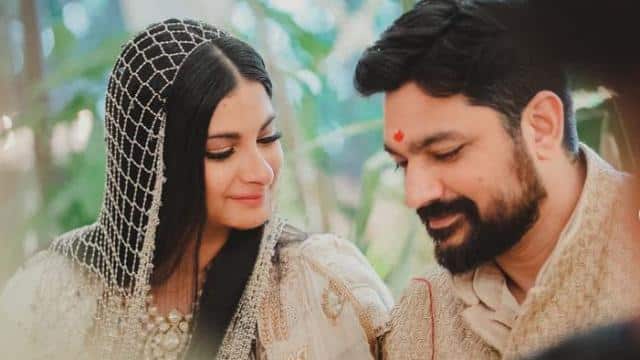 Bollywood actor Anil Kapoor’s daughter and actress Sonam Kapoor’s sister and producer Rhea Kapoor has tied the knot with her long time boyfriend producer Karan Boolani. After marriage, Riya was found very active on social media. Riya Lagatar is celebrating her new journey by sharing unseen pictures from her wedding on her social account. Now in the meantime, Riya has shared another new photo with her love boy and revealed that she wanted to run away and get married. Along with this, he has thanked his wedding designer, wedding plan, makeup man and others.

Rhea Kapoor wanted to get married in the living room

Sharing several pictures of her wedding on Instagram, Rhea Kapoor writes, “I wanted to run away and get married in my living room! Thanks For Making This Possible. In the photo, Riya looks quite stylish as a bride. Their Wedding Look This couple is looking very fabulous.

Along with the fans, many other stars have reacted to this post of Riya. The stars have commented liking Riya’s caption. One fan wrote, Your simple marriage is very amazing and motivational. Congratulations on a new journey..Your marriage is an example for others. Your Cleopatra bridal look is absolutely stunning, surely the most stylish celebrity wedding look is yours. At the same time, some fans have found Riya’s caption very amazing and funny.

Let us tell you that Riya got married in a very private way on 14th August 2021 in the presence of her family, close friends and relatives. Many spectacular wedding pictures went viral on social media, in which the royal avatar of the Kapoor family was seen.

Share
Facebook
Twitter
WhatsApp
Previous articlePriyanka Chopra replaced Deepika Padukone as the chairperson of Jio MAMI, expressed happiness by sharing the video
Next articleNow Saif Ali Khan will earn lakhs by renting his apartment worth crores! Ever had a loving moment with Kareena
RELATED ARTICLES
Entertainment