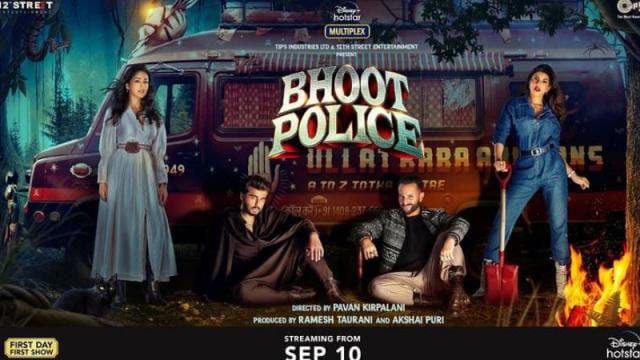 Bollywood actors Arjun Kapoor, Saif Ali Khan, Yami Gautam Jacqueline Fernandez’s upcoming horror comedy film ‘Bhoot Police’ is about to release before its scheduled time. The film, which released on OTT platform Disney Plus Hotstar on September 17, will now release on September 10. On the new release date of the film, all the stars have shared information from their respective social accounts.

weekend will be special

Sharing the poster of the film, Arjun Kapoor wrote, ‘Good news for your weekend, but bad news for the ghosts. ‘Bhoot Police’ is releasing seven days back. Apart from Arjun, Yami Gautam, Jacqueline Fernandez and Javed Jaffrey have also shared the new date information with new posters on their Instagram.

Saif-Arjun will be seen together for the first time

‘Bhoot Police’ is a horror comedy film, directed by Pawan Kriplani, while it is produced by Ramesh Taurani and Akash Puri. The story of the upcoming movie ‘Bhoot Police’ revolves around the ghost-catching brothers Vibhuti and Chironji. Saif and Arjun Kapoor are playing this character. Yami Gautam’s character’s name is Maya and Jacqueline Fernandez’s character’s name is Kanika. This is the first film in which Saif and Arjun will be seen together in lead roles. At the same time, this is the first experience of a horror comedy film for Arjun.