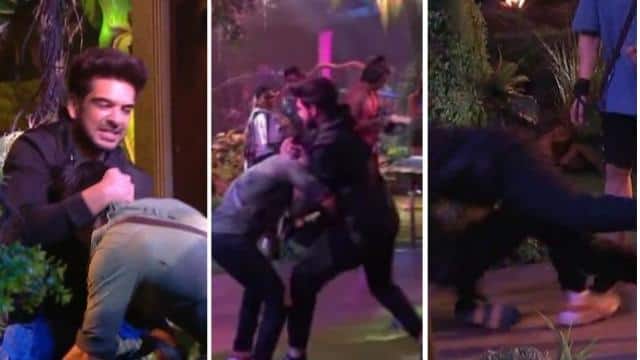 Bigg Boss season 15 is in the news these days for the fights between the contestants. Despite the constant strictness of Bigg Boss, the contestants are aggressively harming the things of the house. Apart from this, they are hurting each other badly.

Scuffle broke out between Karan Kundrra and Prateek Sahajpal

Meanwhile, a new video of the show is going viral, in which contestants Karan Kundrra and Prateek Sahajpal are seen fighting with each other during a task. So much so that Karan Kundra becomes so violent in this scuffle that he slams Prateek on the ground. After this video surfaced, the audience has started trolling Bigg Boss and Karan Kundrra and demanding the actor out of the house.

In this video going viral on social media, it can be seen that Prateek Sahajpal tries to snatch the paper from Karan Kundrra’s hand in the task of ‘cutting paper’. Karan defends himself first though he fails to succeed. In such a situation, a fight breaks out between the two. During this, Karan picks up the symbol and throws it on the floor. Jay Bhanushali objected to this as Jai and Prateek were part of the same team. At the same time, Tejashwi Prakash was seen defending the actor while supporting Karan.

People reacting OH MY GAWD he’s giving Galis..BUT keep moun vrath when people are beating around others, pinning down, jumping thrashing?!🥴
The so called #BiggBoss reviewers on twitter why are they mum when #KaranKundra is doing violence?!pic.twitter.com/D7AjxkrC3T

There was a demand to remove Karan Kundra from home

Sharing this video, a social media user has written – Karan Kundrra pinned Pratik and then slammed him on the floor but no one will question him. If Prateek had done this, everyone including our host would have cracked down on him. Why so much favor on Bigg Boss Karan Kundra?? Take it out of the house.

Karan Kundra pinned #PratikSehajpal and then slammed him on the floor.

But no one will question him. If Pratik would have done it then everyone would have jumped at him including our host.

Why so much favor for Karan Kundra?? #BB15

Another user, questioning Bigg Boss and accusing him of parity, wrote – One was thrown out just for pushing and the other was not even scolded for indulging in extreme physical violence. How is it justified if the basic law of BB is not physical? Don’t be biased! Evict Karan Kundra.