Bigg Boss 15 Live Updates: Salman Khan will get the entry of the contestants of Bigg Boss OTT, the second day will start soon 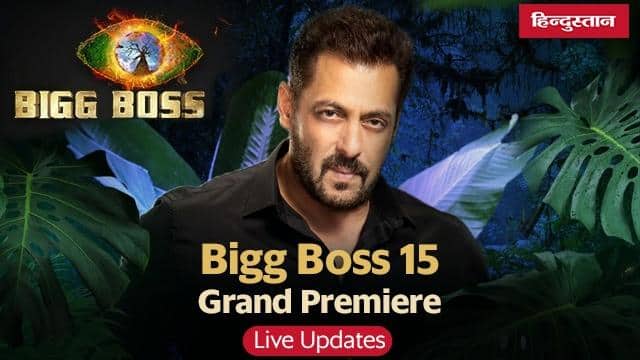 Strong entry of celebs
The entry of some contestants of Bigg Boss 15 took place on the previous day. Contestants entered in a bang style. In such a situation, see with what style which celeb entered.

Salman shows old connections
Salman Khan showed the sharp chemistry of Nishant-Shamita of Bigg Boss OTT in the show, where both of them were seen fighting a lot. After this Salman talked about Shamita and Nishant and got to know the opinion of both. At the same time, another clip showed the bond of Prateek and Nishant. Along with this, the connection of Prateek and Shamita was also shown.

which animal inside
When Salman asked Nishant which animal he sees inside, Nishant told Shamita as deer and Prateek as panther. On the other hand, Nishant called Prateek as Tiger and Nishant as Hyena. At the same time, Prateek considers himself to be a lion.

Ranveer’s entry
Ranveer Singh entered Salman Khan’s show and talked a lot. During this, Salman also shared an old anecdote with Ranveer. At the same time, Ranveer further told that he will host ‘The Big Picture’ soon, so he has come to take hosting tips from Salman.

What is Salman’s big picture
Ranveer asks Salman what is the big picture of his life? On this, Salman said that the family should be together, have good health and keep working. At the same time, when Salman asked Ranveer the right question, Ranveer said – a body like Salman and a farm house in Panvel like Salman.

Donal and Ishaan in dilemma
Remind that after the grand premiere on the previous day, Donal and Ishaan were not sent to the house but to the forest. In such a situation, today both were given a task, in which one will have to nominate himself, otherwise both will be nominated for the first week. In such a situation, both of them talked among themselves and finally taking the decision, Ishaan nominated himself.

families under one roof
Eventually all the family members entered the show and came under one roof. From then on everyone started their own talk. At the same time, there was talk of Donal- Ishaan and Umar’s task. Along with this, Afsana told that she gifts gold to her friends on special occasions. Hearing this jokingly, Jai Bhanushali and Vishal grabbed his feet.

first day of bigg boss 15
At the beginning of the first day, Jai Bhanushali and Vishal Kotian came talking. During this, both of them said that both of us are one. After this Afsana said that she wants Bigg Boss to get her married. After this, everyone laughed and joked on this issue. In the show, ‘Big Ji’ gave the first letter to the family members.

Mouni Roy’s entry
Mouni Roy entered the show. Mouni gave a performance on the song ‘Raat Ka Nasha Abhi’ from the film Ashok. Seeing this performance, all the family members became very excited. Mouni, who reached the house, gave first impressions from everyone. Mouni asked all the contestants which of the three family members did you not like.

Umar and Prateek clashed
Prateek Sahajpal and Umar Riaz clashed inside the house on the very first day. Umar and Prateek clash over their first meeting. In the midst of the debate between the two, Vishal commented in a very funny way and described such a fight as a Tunda fight.

Maisha and Prateek talk
When the family members talked in gestures on the news of Prateik and Maisha’s dating in the house, both of them talked about it. Prateek said that he has a problem with this thing. At the same time, both of them also discussed old things.