Bollywood came in support of Shahrukh’s son Aryan Khan, from Nafisa to Hansal, know who said what 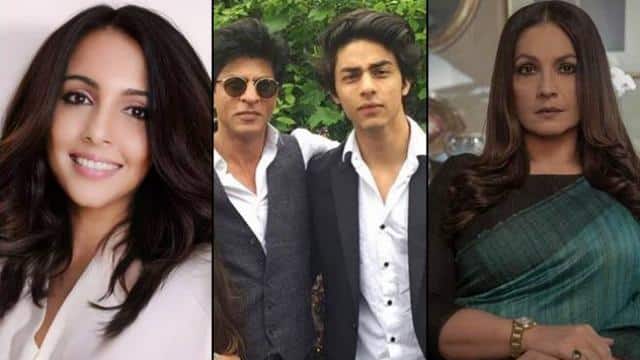 Aryan Khan, son of Bollywood actor Shah Rukh Khan, will remain in the custody of the NCB till October 7. On Monday, while the NCB was demanding custody till October 13, on the other hand, advocate Satish Manashinde was demanding bail. Meanwhile, many Bollywood celebs have come in support of Aryan. In such a situation, let us tell you which celeb said what.

Hansal Mehta: Hansal Mehta, one of Bollywood’s finest directors, wrote in his tweet, ‘It is painful for a parent to see their child in trouble like this. This becomes even more difficult when people start making decisions before they let the law take its course. It is abusive and unsafe for the parents and their relationship with their child. I am with you Shahrukh.

It is painful for a parent having to deal with a child getting into trouble. It gets compounded when people begin to arrive at judgements before the law takes its course. It is disrespectful and unfair to the parent and to the parent-child relationship. with you @iamsrk.

Nafisa Ali Sodhi: Actress Nafisa Ali Sodhi has tweeted for Aryan. Nafisa wrote, ‘Aryan, a young man I am praying for, needs help. Don’t waste her, don’t let her be an example of #drugskill.’

Pooja Bhatt: Actress Pooja Bhatt has tweeted in favor of Aryan. In her tweet, Pooja Bhatt wrote, ‘Shahrukh I stand with you. Not that you need it but I am. This too shall pass.’ With this, in the end, he made a hand-joining emoji.

I stand in solidarity with you @iamsrk Not that you need it. But I do. This too, shall pass. 🙏

Suchitra Krishnamurthy: Suchitra made two tweets related to this. In her first tweet, Suchitra wrote, ‘Nothing is more difficult for a parent than seeing their child in trouble. Praying to all.’ In another tweet, he wrote, ‘For those targeting Bollywood, remember all the NCB raids on film stars? Yes nothing found and nothing proved. This is a farce. The price of fame.’

For all those targeting #Bollywood remember all the #NCB raids on filmstars? Yes nothing was found and nothing was proved. #Bollywood gawking is a tamasha. Its the price of fame

Nothing harder for a parent than seeing their child in distress. Prayers to all 🙏

Sunil Shetty: In an event, Suniel Shetty had said, ‘When a place is red, there are many people there. We assume that this child took drugs, this child did it. I think the process is on, so keep it that way and give that baby space to breathe. When anything happens in our industry, the media breaks down all of a sudden. Everyone understands that this too will be the same. Let that kid have a chance and give the real reports time to come out. As long as there is a child, it is our responsibility to take care of them.

#WATCH | When a raid is conducted at a place, many people are taken into custody. We assume that a particular boy must have consumed it (drugs). The process is on. Let’s give that child a breather. Let real reports come out: Actor Sunil Shetty on NCB raid at an alleged rave party pic.twitter.com/qYaYSsxkyi

Share
Facebook
Twitter
WhatsApp
Previous articleMunmun’s lawyer, who was arrested with Aryan Khan, said – ‘There was a call, so Dhamecha went on a cruise’
Next articleAjay Devgan’s daughter Nysa hits her friend’s face while dancing, will make Kajol’s memory laugh
RELATED ARTICLES
Entertainment