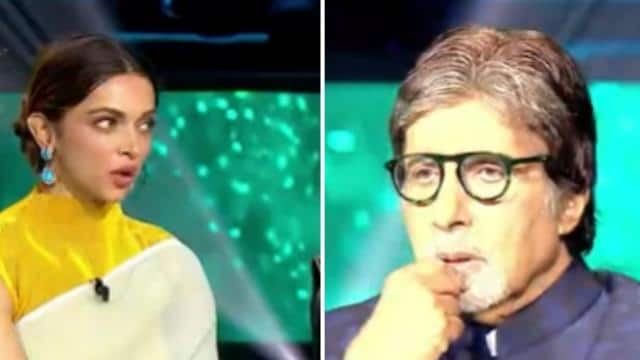 Deepika Padukone has appeared in the film Piku with Amitabh Bachchan. He was in the role of his father in the film. Now Deepika has complained about her husband Ranveer Singh to her onscreen father. Big B also called him to attend Ranveer’s class. All this happened in the episode of KBC 13. In this, Deepika Padukone will be seen with Farah Khan.

Said – I will feed by sitting on my lap

Deepika Padukone will be seen alongside Farah Khan in the upcoming episode of KBC 13. Its promo has been released by the channel. In this funny video clip, Deepika is seen complaining about Ranveer in front of everyone. Dipika says, he had promised me that one day he would cook and feed me breakfast. Till date this has not happened. On this Amitabh Bachchan calls Ranveer. Big B tells him, your wife complains a lot. On this Ranveer says, instead of giving baby warm regards, you are complaining to me… Kamal hai man. Amitabh Bachchan says, you don’t cook, you have been speaking for so many years. To this Ranveer replies, now Bachchan sahib has spoken. Now I will feed you omelet by sitting on my lap.

Farah Khan sitting with Deepika says on this, only told to feed omelet, not to sit in my lap. Let us inform that after this shoot, the corona report of Farah Khan has come positive. She had informed on Instagram that both of them had received vaccine doses and she was working with vaccinated people, yet she got corona. Later he also posted that Deepika and Amitabh Bachchan also got tested after shooting together, thankfully their tests are negative.

People are not just crazy about Deepika Padukone, see – the most killer look ever in a sari