Drashti Dhami was seen having fun with Karan Johar, know why she said- ‘Your favorite actress Kang… Priyanka Chopra’ 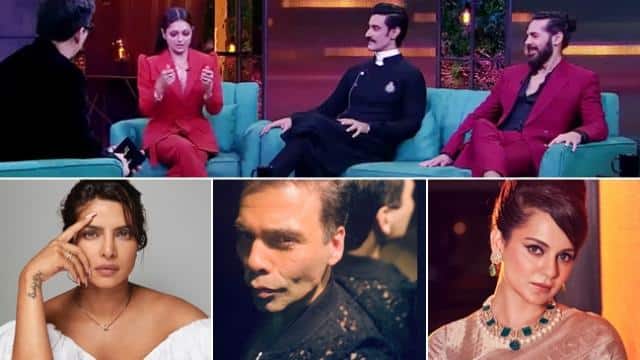 The web series ‘The Empire’, which was released some time ago on Disney+ Hotstar, remains very much discussed. While some people are praising it a lot, while some are calling it an imitation of Game of Thrones. Meanwhile, the cast of ‘The Empire’ reached Koffee Shots with Karan, where there was a lot of fun.

Dino calls himself a puppy
In the promo, Karan Johar, asking about Dino’s look, says, ‘I have seen your look in the series, it is amazing.’ To this Dino says, ‘I followed an animal, it is a panther.’ After this, Karan jokingly says- ‘What kind of animal are you off screen?’ On which Dino described himself as Puppy and said that everyone likes Puppy.

Kunal gave a funny answer
After this, in the promo, Karan asks the three questions that who will be seen clicking selfies in Battlefield? To this, Kunal replied immediately and said – I think you. Agreeing to Kunal’s point, Dino was also seen acting to take a selfie.

Your Favorite Kang… Priyanka Chopra
At the end of the promo, Karan Johar is seen asking Drishti which actress you consider to be your role model in the recent past. On this, Drishti said with aplomb – your favorite song … Priyanka Chopra. On Drishti’s answer, Karan says – I have kept a straight face, you can see this is my resting face.

in the mood for fun
Actually, Drashti was first to say Kangana Ranaut but in the end she said Priyanka and everyone knows how Kangana and Karan’s relationship is. At the same time, it is clear from Drishti’s answer that she is seen in a fun mood with Karan.