Jacqueline Fernandes wreaks havoc in red saree, will be surprised to know the price 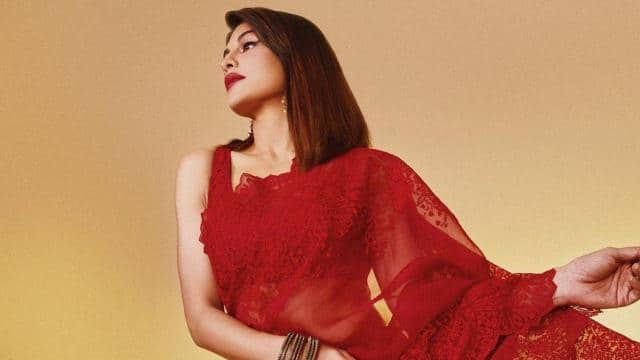 Bollywood’s beautiful actress Jacqueline Fernandez is in discussion about the film Bhoot Police these days. Recently, Jacqueline reached the sets of Dance Deewane 3 to promote Bhoot Police. Jacqueline won everyone’s heart with her style in a red sari, meanwhile the price of her sari has come to the fore.

The price of saree is more than 54 thousand
In fact, recently, Jacqueline’s designer Chandni Whabi shared a picture of Jacqueline wearing a red ruby ​​sheer saree on her social media. Jacqueline is looking very beautiful in saree. In such a situation, now the price of this saree has come to the fore. Please tell that the price of Surkh Farrin saree is 54 thousand 500 rupees.

ED had recorded the statement
Remind that some time ago Jacqueline was in discussion about money laundering case and ED had also recorded her statement. According to reports, Jacqueline was taken as a witness in the investigation and she was interrogated as a victim. The main accused in this case is Sukesh Chandrashekhar. An FIR was registered against Sukesh by the Economic Offenses Wing of Delhi Police. He is accused of criminal conspiracy, cheating and extortion of around Rs 200 crore. According to ED sources, Sukesh duped Jacqueline from Tihar Jail through caller ID spoofing.