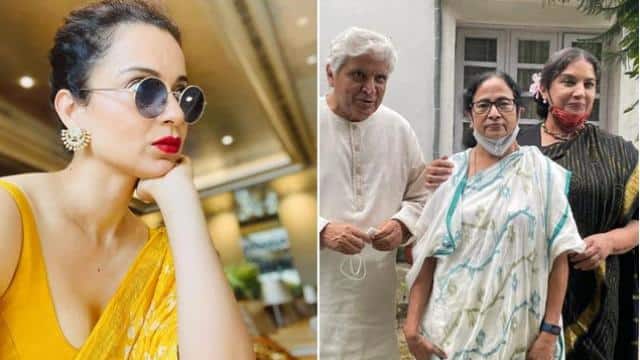 Bollywood actress Kangana Ranaut’s name is one of those stars, who are often in discussion about her social media posts. Apart from Bollywood, Kangana also expresses her opinion on other issues with utmost impunity. In such a situation, Kangana has now targeted the meeting of lyricist-writer Javed Akhtar and actress Shabana Azmi with West Bengal Chief Minister Mamata Banerjee.

meeting on thursday
In fact, on Thursday (July 29), Javed Akhtar and Shabana Azmi met West Bengal Chief Minister Mamata Banerjee. In such a situation, now Kangana has posted a scathing Facebook post on that meeting. Kangana has also shared a picture of Shabana, Javed and Mamta in her post.

bollywood mafia meetings
Kangana wrote in her post, ‘Yesterday Shabana Azmi and Javed Akhtar ji had a strategic meeting with the Chief Minister of Bengal, who is known to all as Tadka, due to which they are now slowly holding several small meetings. Bollywood will host Mafia’s street corner.

Will make Tadka a goddess…
Kangana further wrote in her post, ‘These will put pressure on the Khans (Khan actors) and with the help of all the big production houses, the Khans will engulf all the big and small actors, together they will make Tadka a goddess, day to night. And this program of showing day to night has started, but don’t forget that I will also strip all the traitors naked… Just be careful.

Kangana’s projects
Significantly, these days Kangana is shooting for her upcoming film Dhaakad. On the other hand, if we talk about Kangana Ranaut’s upcoming projects, Tejas and Thalaivi are also included in the actress’s account along with Dhakad. Remind that the release date of Kangana’s film Thalaivi has been postponed due to Kovid. Kangana’s look from all three films has surfaced on social media.