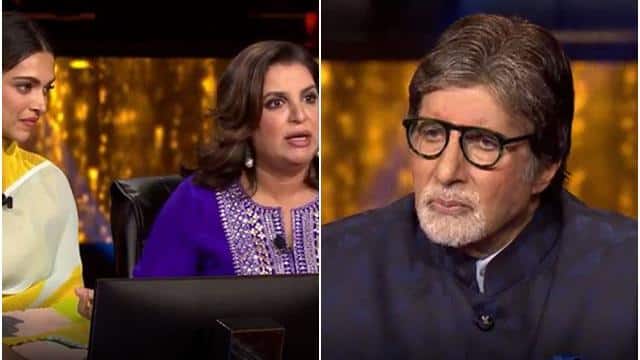 Bollywood’s ‘Shahenshah’ actor Amitabh Bachchan has often remained in the discussion for one reason or the other. These days Amitabh has been in discussion about the TV show Kaun Banega Crorepati 13. A video clip of the show is fast becoming viral on social media, where Amitabh gets emotional in the presence of Farah Khan and Deepika Padukone.

Farah came to help Ayansh
Actually Sony TV has shared a clip of the show on social media. In this video clip, Deepika Padukone first explains why she has come on the show, then Farah Khan talks about it. In the clip, Amitabh says, ‘Ladies and gentlemen, Farah Khan is playing for 17-month-old baby Ayansh who is battling a serious illness.’

Rs 16 crore injection
After this, in the video, Ayansh’s mother tells about Ayansh’s illness and her son. She tells that doctors Ayansh is suffering from spinal muscular atrophy. After this Farah says, ‘When Ayansh is 2 years old, then he will be treated with a medicine which is the most expensive injection in the world. Its cost is Rs 16 crore and it can save its life. We want to save Ayansh.

Amitabh got emotional
Amitabh Bachchan also gets emotional after listening to Farah Khan and says, ‘I don’t know whether I should talk to you now or not, but Farah, I also want to personally cooperate in this work, I will give you the amount later. will tell. I don’t want to discuss it now. After listening to Amitabh, Farah Khan expresses his gratitude with folded hands. At the end of the video, Amitabh Bachchan also appeals to other people to come forward openly and help.