KBC 13: Amitabh made fun of Sourav Ganguly on ‘KBC’ host, Virender Sehwag was shocked to hear 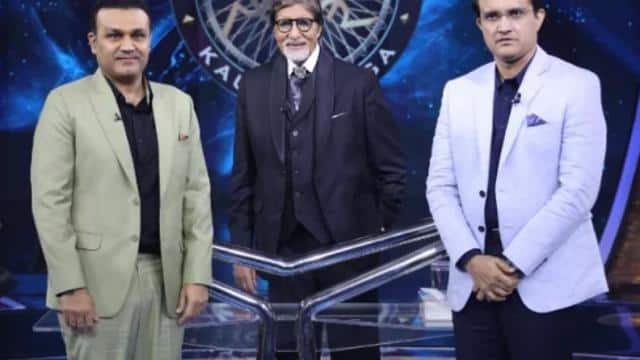 A new segment has started in Amitabh Bachchan’s ‘Kaun Banega Crorepati 13’. The name of this segment is ‘Fantastic Friday’. The first guests of this segment were former cricketer Virender Sehwag and former Indian team captain and BCCI chief Sourav Ganguly. A promo of the show was released, in which Amitabh Bachchan is seen giving a warm welcome to these two cricketing legends.

In the promo you can see that Amitabh Bachchan has said that while welcoming both of them, he says that thank you both for coming here, giving us permission to call. On this Sourav Ganguly says – It is not a matter of permission, we were told that Amitabh Saab is calling, so we came. We can come from anywhere in your name.

Sourav-Virendra made many funny revelations

In the video, Amitabh enjoys and tells Saurav that we have heard that you make people wait. Sourav does not understand anything, on this Virendra says that Sir is talking about getting Steve Waugh to be weighted in 2001. After this Saurav revealed the story behind making Tross wait. Saurav says that to be honest, he got the weight done for the first time because of the blazer.

Our jobs are in danger!

In the video, Amitabh explains that Sourav hosts KBC in Bengal. He says see my job should not come in danger. In the promo video Sourav-Virendra has revealed even more fun. Both are seen pulling each other’s legs. It is worth noting that this episode of ‘KBC 13’ of Virender Sehwag and Sourav Ganguly will be shown on Sony TV today on 3 September.