KBC 13: Savita Bhati left the show on KBC’s question of one crore, could you answer? 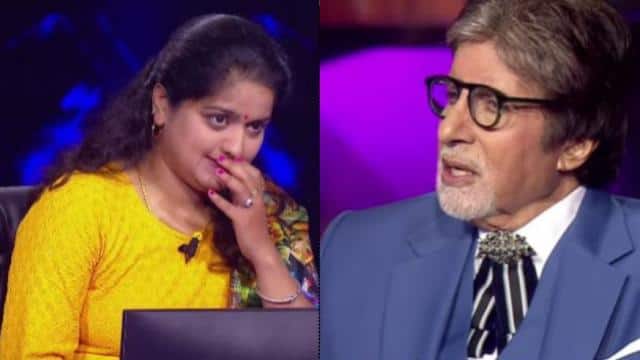 Contestant Savita Bhati, who came from Jodhpur in the show Kaun Banega Crorepati 13, could not succeed in her objective in the end. However, his performance in the show was superb. Savita Bhati won an amount of Rs 50 lakh by answering 14 questions in the show, but failed to answer Amitabh’s 15th question i.e. 1 crore and decided to quit the show.

Savita is a nurse in Jodhpur’s railway hospital

For your information, let us tell you that Savita Bhati, who came from Jodhpur, is a nurse by profession. She works in Railway Hospital, Jodhpur. According to the report, Savita but has qualified RAS. Not only this, she was a corporative inspector cadre in 2012, but she left this job because of her family and frequent transfers.

1 crore question was related to the first world war

Now let’s talk about Amitabh’s one crore question. It has already been told that Savita has become a 50 lakh winner by showing her talent. However, when Amitabh asked her a question related to the First World War, she became a little nervous and was unable to answer the question.

Amitabh asked Savita – During the First World War in Turkey in 1915-16, more than 16000 soldiers of the Indian Army fought bravely with the Allies? Option of this question: A. Galicia, B. Ankara, C. Tabasor, D. Gallipoli, Answer- D. Gallipoli. The correct answer to this question was – Gallipoli.

Even though Savita could not answer this question of Amitabh, but she emerged as a good player in Big B’s eyes. Amitabh was pleased with Savita’s style of play and praised all the women saying – not many people reach this level. And I think most of the contestants who have reached this stage or who have won 1 crore this season are mostly women. Hence, a huge round of applause for the ladies.

Himani Bundela became the first millionaire of this season

Contestant Savita is the third contestant of this season of KBC, who has asked the question of 1 crore. Last month, Himani Bundela won 1 crore to become the first millionaire of the season by answering a question related to British spy Noor Inayat Khan. However, she could not give the 7 crore jackpot question and decided to quit the show. Earlier this month, Pranshu Tripathi also reached the question of 1 crore but left the show with 50 lakhs.