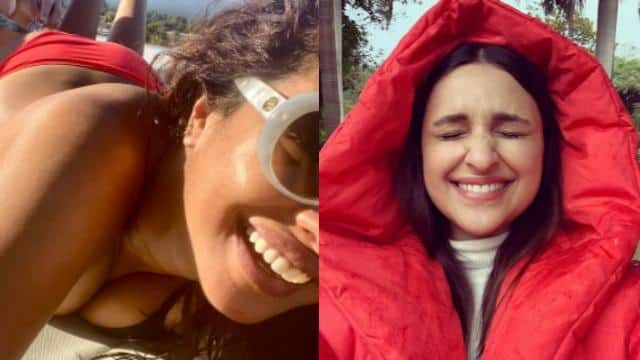 Priyanka Chopra and singer Nick Jonas, who have become a global icon, are a famous celebrity couple. They do not hesitate to express their love in a bold way. Priyanka has created panic by posting bikini pictures on her Instagram. The actress is enjoying the sun by the pool. She is wearing a black bikini top with red bottom. Nick Jonas is sitting next to him, who is shirtless. Seeing Priyanka’s picture, while fans were stunned by her hot looks, many users did not miss to troll. Meanwhile, Parineeti Chopra has also commented on her picture.

Priyanka wrote in the caption with her picture- ‘Snack.’ Also posted emoji of fork and knife. At the same time, Nick has taken a fork in one hand and a knife in one hand.

There is a very good bonding between Parineeti and Priyanka. Both are often seen spending time together. On the work front, Parineeti was last seen in the films ‘Sandeep Aur Pinky Faraar’ and ‘Saina’. Her upcoming film is with director Ribhu Das Gupta. The name of the film has not been decided yet.

returned home over the weekend

Talking about Priyanka, she was busy shooting for her film ‘Citadel’ in London for some time. She returned to America over the weekend. She also attended one of Nick’s concerts. Apart from Citadate, Priyanka has films ‘Jee Le Zara’ and ‘Matrix 4’.