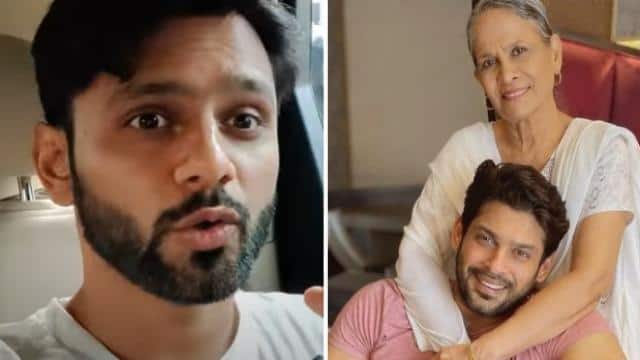 After the death of Siddharth Shukla, many celebs went to his house to meet his mother. Rahul Vaidya is also one of them. By sharing a video, Rahul has told how he got the news of Siddharth’s heart attack. He has also told what Siddharth’s mother told him when he went home. Rahul told that his mother is very strong. Along with this, he also requested people to take care of their health.

Rahul told, how did he get the news

Rahul says, on 1st September, at 10.30 am, a call came. This phone call was from a publication, who asked, are you Siddharth’s friend. We heard that he had a heart attack. Rahul was shocked on this. Rahul says that then he had heard this news for the first time. He says, I did not believe it. Then flashes started everywhere that Siddharth Shukla passed away.

Rahul was afraid to go inside

Rahul told that he and Disha went to meet the family members. We were afraid to go inside, he said. There was some reason why Siddharth was so strong. Auntie is very strong. What is the pain of losing a young son, that we and you probably will never be able to experience. We were both stunned to hear what Auntie said. Aunty said, son was always heard, someone’s young son is gone, someone’s young son has died. Never thought this would happen to us. Now for whom will I live, I have lost everything. Rahul said thanks to Siddharth Shukla that he had reached the finale of Bigg Boss only after giving him courage.

Rahul said, I pray to God to give strength to Auntie, her sisters and Shehnaaz. When I went that day, Shahnaz was in no mood to talk. Understandably, she was in complete shock. I want to say that health is wealth. If anything is bothering you, share it. If there is any physical problem then get it checked too. He again prayed for Siddharth’s family.