Shahrukh Khan did a romantic dance on the song ‘Main Hoon Na’ with Farah Khan, Ranveer Singh-Riteish Deshmukh commented after watching the video 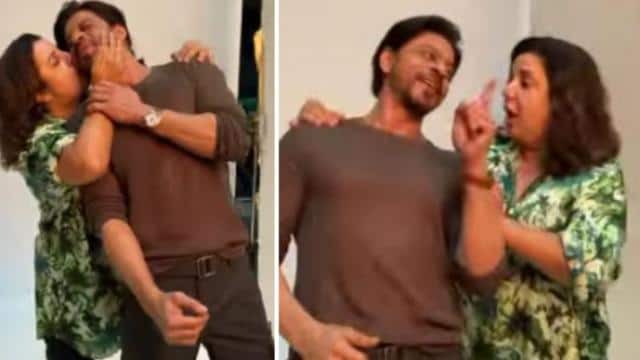 Bollywood filmmaker and choreographer Farah Khan has shared a video on her Instagram account with Bollywood Badshah Shah Rukh Khan. In this video, both these veterans are seen performing a romantic performance on the title song of the film ‘Main Hoon Na’. This cute video of both of them has become viral on social media. Many Bollywood stars have commented on the video for their fans by liking their performance.

My Most Favorite.. One and Only Shahrukh Khan

Sharing this video, Farah Khan writes in the caption, ‘My most favorite.. One and only Shahrukh Khan, You are number one.. Hashtag Main Hoon Na.. Hashtag Farah Ke Funday.’ In this video you can see that Farah-Shahrukh is dancing in front of a white screen. During this, Farah also teases Shahrukh a little. At the end of the song, Farah kisses on Shahrukh’s gas. Both are looking cool while lip-syncing the song.

Farah and Shah Rukh Khan’s friendship in B-town is an example. Both have worked together in many films. Actor Riteish Deshmukh wrote on this video of Farah-Shahrukh, ‘I have always been my favourite’. Actor Ranveer Singh laughed and wrote, ‘My heart is melting’. Actor Punil Malhotra wrote, ‘Super’. Apart from these people, singers Shreya Ghoshal and Mohan Shakti have reacted to this video by making red heart emoji.

Farah made her debut as a director with ‘Main Hoon Na’

For your information, let us tell you that the film with which Farah Khan made her debut in the industry as a director was the film ‘Main Hoon Na’. This film was released in 2004. The film was successful at the box office. Shahrukh Khan was in the lead role in this film, whose character’s name was Major Ram Prasad Sharma. Apart from Shahrukh Khan, the film also starred Suniel Shetty, Zayed Khan, Amrita Rao, Sushmita Sen and Kirron Kher among others. Apart from this film, Shahrukh Khan and Farah Khan have worked together in many films. This includes the films ‘Om Shanti Om’ and ‘Happy New Year’.