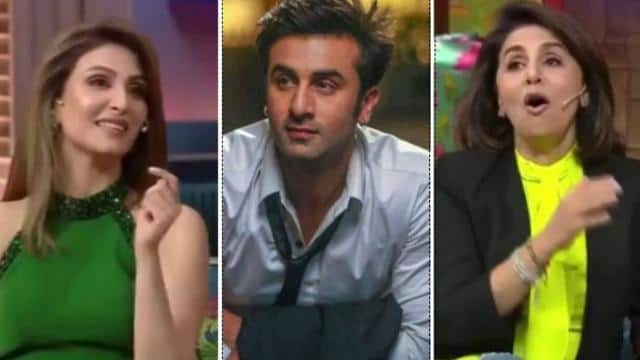 Veteran actress Neetu Kapoor with her daughter Riddhima Kapoor Sahni will soon be seen in the upcoming episode of TV comedy ‘The Kapil Sharma Show’. This mother-daughter duo is going to participate for the first time in this show. A promo of the show has surfaced, in which Riddhima is seen revealing her brother actor Ranbir Kapoor’s pole in front of her mother Neetu. In the promo, Riddhima has revealed that Ranbir often used to steal her dress and give it to his girlfriend.

Riddhima shared the promo of the comedy show

Ranbir used to gift Riddhima’s clothes to his girlfriend

At the beginning of the promo, Kapil makes a grand entry with Neetu Kapoor. The song ‘Keh Doon Tumme Ya Chup Rahoon’ can be heard playing in the background. After this Kapil Sharma asks Riddhima that I have heard that when you were studying in London, Ranbir used to pick up your things and gift them to his girlfriend. To this Riddhima says yes! Then she says, yes I remember that when I came back from London, her girlfriend was coming to me, so I saw she was wearing my own top, which I was looking for. Later it was found that Ranbir used to pick up my own things and give them to her. After this disclosure of her daughter, Neetu gets shocked and starts laughing.

This weekend, the comedy festival will be decorated with funny tales of the Kapoor family.

Looking at the promo, it looks like a lot is going to happen this weekend. Because this time in the weekend, these comedy shows are going to be decorated with funny stories of Kapoor family. Riddhima-Neetu together are going to tell about some untold things of the Kapoor family which will be very interesting.