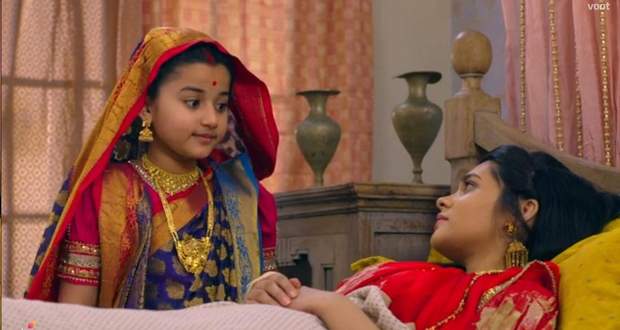 The upcoming episode of Barrister Babu begins where New Thakurmaa unleashes the activities that the couple do on the first night of the wedding, hence, she makes Bondita sits beside her. So that, she can observe whatever new Thakurma is trying to make her understand, but once she asks Bondita about her knowledge for Nuptial Night. She describes it in a too funny way that no one could stop their laughing because she recalls all those moments which she faced in her childhood. Because when she was a kid Trilochan forced her to come close to Anirudh and told her these things which she is unleashing.

Then New Thakurmaa makes her understand about the nuptial night in an appropriate way by saying that when her husband tries to come close to her, so should not stop him. Because it is the beginning of their strong relationship, Anirudh is hearing everything and getting shy because it is related to him too. Further, she says that this is what is going to happen with her because she got married to Anirudh. So this step will give height to their relationship and make it too strong that no one will be able to make them separate.

At the same time, Bondita replies that if their husband tries to kiss them so they should permit him to continue, but Thakurmaa gets suspicious of Bondita because she is using such English words too. Meanwhile, she asks how could she use these words but she makes an excuse that she worked with one foreign officer too, therefore she knows some words along with pronunciation. As we have mentioned that Anirudh is hearing everything and getting shy too because Bondita is tackling the situation too sagaciously. Hence, he is feeling proud of her because as soon as time passed Bondita brushed up herself.

On the other hand, Anirudh tries to come close to her but Bondita stops him by saying that he can not come close to her unless she permits him. Anirudh praises her by saying that everyone should follow this because it is basic manors which everyone should learn. But at the same, Bondita hugs him and says that she was kidding spontaneously something falls down and everyone comes together there and sees them together. After seeing this, they start passing derogatory remarks to her and address her witch as well. But New Thakurma favors Bondita and says that if she loves Anirudh so nothing is wrong to come together like this.