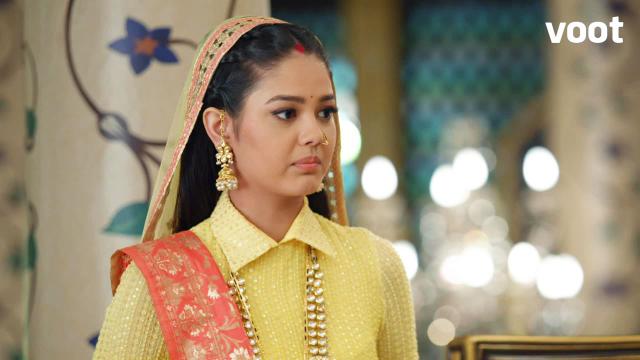 The episode starts with Prakashi asking Anjali and Virender where are they going together. Anjali informs Prakashi what she saw say and Prakashi denies her to go anywhere. She says she is feeling pity for Purvi. She even refuses Daksh and now her heart got broken. Virender asks then if you want to make the entire Panchyat wait and leaves. Prakashi and Anjali grins and go after Virender. Purvi asks Daksh to stop now, but he pushes her on the bed, Purvi tries to escape but in vain. Purvi yells what has got into him. You are not supposed to like this, Purvi sobs.

Daksh says that Dhwani can’t betray Daksh, you begin this game and I am going to finish it now. Purvi again asks pleads with to leave, but he is forcing on Purvi her clothes even gets torn in this coercion. Just then Purvi noticed Virender through the window and shouts Mukhiji. Virender comes there and asks Daksh to let her go otherwise you will be killed by me., but Daksh didn’t listen to him and holds Purvi’s hand firmly. Purvi again requests Daksh to let her go and pleads with Virender to help her.

Virender asks Daksh to come outside and leave Purvi. Daksh replies that you paid for her and made her your Molkki, he further says I ain’t that cheap like you are. He asks Virender to leave Purvi as she is mine only. Daksh says you brought her, but now she will become mine either with love or with power. He again pushes Purvi on the bed, Virender gets enraged outside and tries to enter the room. Purvi continuously requesting Daksh to spare her, but Daksh goes insane and didn’t listen to Purvi.

Virender tries to barge into the room but fails, Virender continuously struggling for opening the door. Just then one of the guards noticed that Virender hasn’t returned yet. Nani asks Prakashi what is going on here, but Prakshi didn’t give her a proper reply. Later, Prakashi tells her plan to Nani and tells her that Daksh is going to win Purvi in ​​the end. Nani says do whatever you want I just want results in our favour. Prakashi tells Nani that they provoked Daksh to Molest Purvi and she will be compelled to be with him. Nani gets shocked and slaps her. Watch the complete episode on Voot anytime. Get Molkki Written update here on Social Telecast, stay tuned.