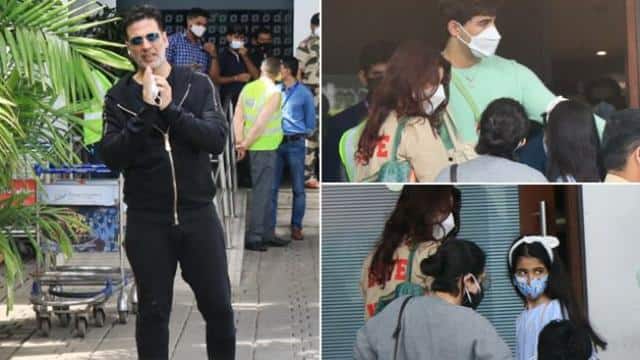 On September 8, the mother of Bollywood actor Akshay Kumar passed away. As soon as Akshay came to know about the deteriorating health of his mother, he returned to Mumbai from the shoot of the film. In such a situation, Akshay has once again left for London, where his wife Twinkle Khanna and children Aarav-Nitara (Twinkle Khanna, Aarav & Nitara) were seen with him at the airport.

Akshay left for London
Let us inform that Akshay or his family has not been confirmed to go to London, but according to media reports, the actor has returned to London to complete the shooting. At the airport, Akshay stopped and posed after seeing the paparazzi, although the sadness of his mother’s death can be clearly seen on Akshay’s face.

Life goes on…
Remind that the day after the death of his mother, Akshay had made a post on his birthday. In the picture, mother is seen kissing on Akshay’s cheek. At the same time, Akshay is closing his eyes and feeling his love. Sharing this photo, Akshay writes in the caption – Would never have liked it like this but I am sure mother is singing Happy Birthday to me from there (above)! Thank you all for your condolences and well wishes. Life goes on.