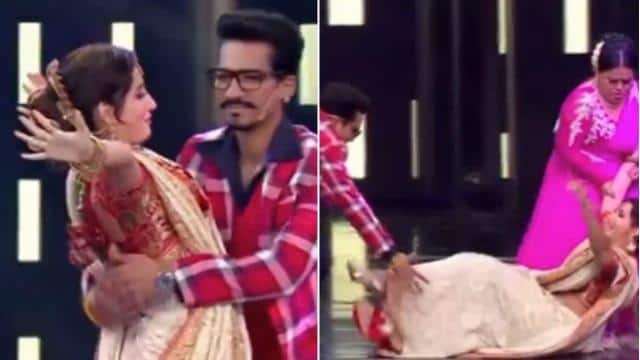 It is very difficult that Bharti Singh is present somewhere and there should not be a lot of laughter and fun. Something similar is often seen on the sets of Dance Deewane 3, where Bharti and Haarsh limbachiyaa along with Nora Fatehi had a lot of fun, a video of which is also going viral. Is.

Nora is dragged by Bharti
Actually a video has been shared from an Instagram page named Bolly Kahani. In the video, Harsh and Nora Fatehi are seen dancing to the song ‘Yeh Mera Dil Pyaar Ka Deewana’. At the same time, seeing both of them dancing, Bharti also comes on stage. After this Bharti and Nora dance together. While dancing while jokingly, Nora and Harsh fall, after which Bharti drags Nora away.

video going viral
This video of Nora Fatehi, Bharti Singh and Harsh Limbachiyaa is becoming increasingly viral on social media. It is seen in the video that the judges of the show are also laughing a lot after seeing this dance of the three. Fans are also very fond of the video.

Nora will be seen in ‘Bhuj – The Pride of India’
Significantly, Nora has shown her strength in many dance videos. Due to giving back to back hit songs, Nora is also called Hit Machine. At the same time, let us tell you that along with her dance, Nora has also shown her strength as an actress. Nora has appeared in Street Dancer with Varun Dhawan and Shraddha Kapoor, Bharat with Salman Khan. Along with this, Nora will soon be seen in Ajay Devgan’s film ‘Bhuj – The Pride of India’.